A Turing Test is a method of inquiry in AI for determining whether or not a computer is capable of thinking like a human being. The test is named after Alan Turing, the founder of the Turing Test and an English computer scientist, cryptanalyst, mathematician, and theoretical biologist. Turing proposed that if a computer can mimic human responses under some particular condition, then it can be said to possess AI. The original Turing Test requires three terminals, each of which is physically separated from the other two. One terminal is operated by a computer, while the other two are operated by humans. During the test, one of the humans functions as the questioner, while the second human and the computer function as respondents.[1] The questioner interrogates the respondents within a specific subject area, using a specified format and context. After a preset length of time or number of questions, the questioner is then asked to decide which respondent was human and which was a computer. The test is repeated many times. If the questioner makes the correct determination in half of the test runs or less, the computer is considered to have AI because the questioner regards it as “just as human” as the human respondent.[2] 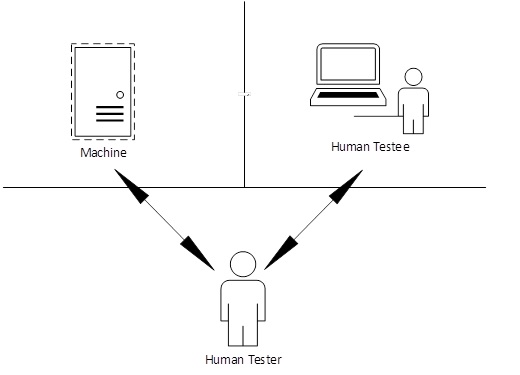 Virginia Savova and Leonid argue that the Turing test is a valid test of AI. They contend that a machine could not fake its way through the Turing Test in a manner that violates our intuitions about intelligence. They also contend that no look-up table could be composed to allow a machine to pass the Turing Test adequately.[3] Mark Halpern, a computer software expert who has worked at IBM, argues that the Turing Test is fundamentally flawed. During a Turing Test conducted in 1991, judging was flagrantly inadequate with computers that were providing responses were judged human, while some humans were judged to be computers. He concluded that even if a computer were to pass the Turing Test, it would not show that they had achieved AI.[4]

Yaakov Menken, an orthodox rabbi, argues that despite significant advances in computer science, no computer has been created that even comes close to legitimately passing the Turing Test. Based on his observations and Jewish religious teaching, he concluded that human beings would never create a computer that can communicate with human intelligence.[5]